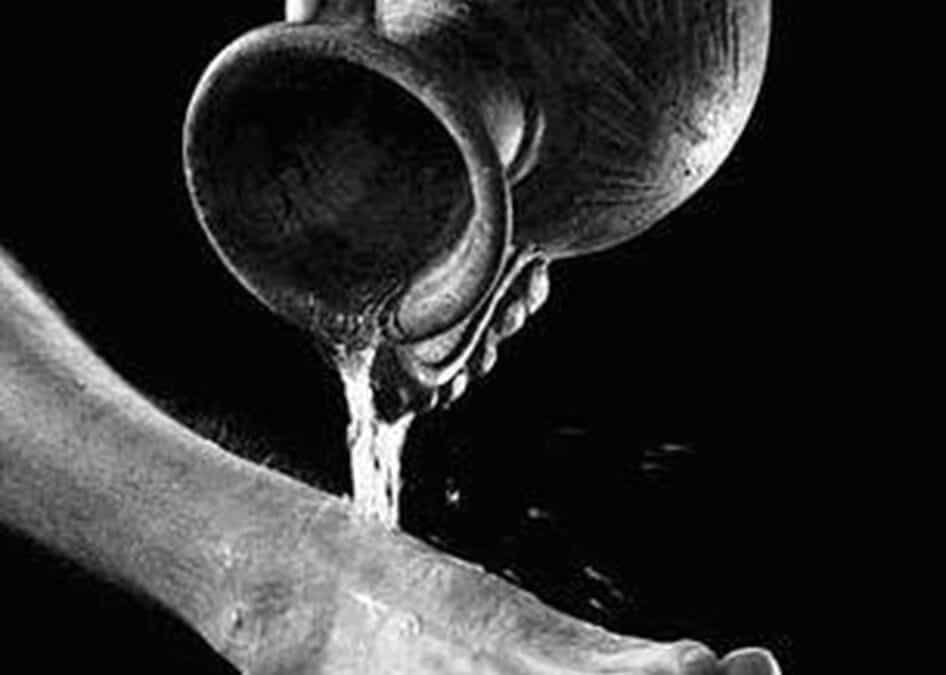 “Gathering for one of the final times with his students and closest friends, he (Jesus) rises from the table, wraps a towel around his waist, assumes a servant’s posture, and begins to wash their feet . . . in attendance at the meal is Judas Iscariot, the disciple who would soon betray Jesus and precipitate his arrest, beating—and execution.” John Pavlovitz, The Bigger Table

Did I read that correctly? As many times as I have read the story of the Last Supper, how did I miss this important detail? If I didn’t miss it, then why is it making such an impact on me now?

While the details vary slightly in the sequence of events, the gospels of Matthew, Mark, and Luke all include Judas seeking money to betray Jesus, logistical preparation for the meal, announcement of the betrayer—although not by name—and the celebration of what is now known as Communion or the Eucharist within Christian denominations. The book of John is the only gospel that includes the foot washing anecdote.

The narrative reads as follows from the NSRV translation of John 13: 1-11.

Now before the festival of the Passover, Jesus knew that his hour had come to depart from this world and go to the Father. Having loved his own who were in the world, he loved them to the end. The devil had already put it into the heart of Judas son of Simon Iscariot to betray him. And during supper Jesus, knowing that the Father had given all things into his hands, and that he had come from God and was going to God, got up from the table, took off his outer robe, and tied a towel around himself. Then he poured water into a basin and began to wash the disciples’ feet and to wipe them with the towel that was tied around him.

He came to Simon Peter, who said to him, “Lord, are you going to wash my feet?” Jesus answered, “You do not know now what I am doing, but later you will understand.” Peter said to him, “You will never wash my feet.” Jesus answered, “Unless I wash you, you have no share with me.” Simon Peter said to him, “Lord, not my feet only but also my hands and my head!” Jesus said to him, “One who has bathed does not need to wash, except for the feet, but is entirely clean. And you are clean, though not all of you.” For he knew who was to betray him; for this reason he said, “Not all of you are clean.”

Only after Jesus finishes washing their feet, does he reveal the identity of the betrayer. Yet he does it in such a subtle way that the other eleven disciples think Judas is dismissed from the gathering to run some errands. They are seemingly oblivious to Judas’s nefarious scheme.

Jesus washed the feet of his traitor!

Whatever your spiritual practice, shouldn’t this veritable act of humility stop you in your tracks?

Judas was not a stranger to Jesus. These men spent three years together, day and night, in each other’s company. Judas observed the many miracles and healings Jesus performed and listened to his countless teachings and prayers.

Not only was this a gesture of lowliness on Jesus’s part, but also an action of hope. “Unless I wash you, you have no share with me.”

“The book of John uses an unusual Aramaic word for wash. It is ‘shug.’ I could not find this word in any extra Biblical literature and of course Biblical sources simply says it means to wash. However, the word is found in the Hebrew but it means to help or encourage growth, like watering a plant will help it to grow.

The connection lies in the idea of watering for the purpose of growth. As a Rabbi, Jesus would often make a play on Hebrew words bringing them into the normal conversation in Aramaic. What the disciples should have picked up on was that to grow spiritually, they had to lower themselves. They were never to consider themselves better than others.” Chaim Bentorah

This optimistic act in service to the person who would betray you especially knowing your life in this earthly form was soon ending, is jaw dropping and mind boggling.

As Mr. Trump desperately promotes his iniquitous ‘us-versus-them’ narrative, the animosity in our divided nation continues to grow exponentially. I find myself very far away from some of those whom I love and respect and who claim to love and respect me, and not knowing what to do about the divide or how to communicate with them.

Therein lies the answer to my conundrum . . . wash their feet.

But what does that look like? Metaphorically speaking how do I wash the feet of those who believe me to be deceived? How do I show the same mind-bending grace as Jesus did to those friends and acquaintances who think I am a ‘left-wing-radical-liberalist’ who lost her way from the teachings of Jesus?

After all, in the four years since my mother died, I have ‘come out’ as pro-choice, an ally of the LGBTQ+ community, a supporter of BLM, and have frequently posted my opinions about Mr. Trump’s abominable leadership “skills.” I cannot say that I blame my friends and family if they are confused. Prior to my mother’s death, I did my best to fly under the radar and led many people to believe that I felt the same way they did, whether it be left or right, not wanting to confront anyone perhaps least of all myself.

I still love God with “all my heart, and all my soul, and all my mind, and all my strength.” I still love “my neighbor as myself.” Although most of the time this simply means not being an a**hole, and not getting caught in the illusions of this present world.  Or as Paul says in Romans 12:18–

If it is possible, so far as it depends on you, live peaceably with all.

What did Jesus do when engaged with those who thought he had lost his mind, who supposed him to be deceived, whose minds and hearts seemed to be set in stone? How did he wash their feet?

Among other things he broke the “rules,” he told stories, and he asked questions.

Of these deeds, the one I most resonate with is asking questions. Jesus silenced many people simply by asking a question.

With one question, Jesus pointed out their hypocrisy. The trap they laid was not about paying taxes, but about whom they worshipped—the living God, or the emperor on the coin.

Earlier in the same chapter of Luke, the same folks question Jesus’s authority and he responds with “I will also ask you a question. Tell me: John’s baptism—was it from heaven, or of human origin?” Their reaction is pitiful because they know they are caught in the very trap they set and so they refuse to answer him. Knowing this, Jesus is under no obligation to reply to their query.

Beyond gathering facts and figures, questions have the potential to bring about metacognition and transformation—spiritual growth—within the spaciousness of humility, hope and grace.

“There’s no value in digging shallow wells in a hundred places. Decide on one place and dig deep. Even if you encounter a rock, use dynamite and keep going down. If you leave that to dig another well, all the first effort is wasted and there is no proof you won’t hit rock again. Sri S. Satchidananda

Asking questions of ourselves and others allows us to dig deep, deep wells where we will find “rivers of living water” to quench our thirst.

I may never be as good at asking questions as Jesus was, but I know I will never be content with the superficiality of a life lived in and through the confining boundaries of either/or thinking. I see the divide, I hear the Divine calling me and I will continue to ask you, as well as myself, questions—difficult, challenging, possibly unanswerable questions.

Can you think of anything better to do?