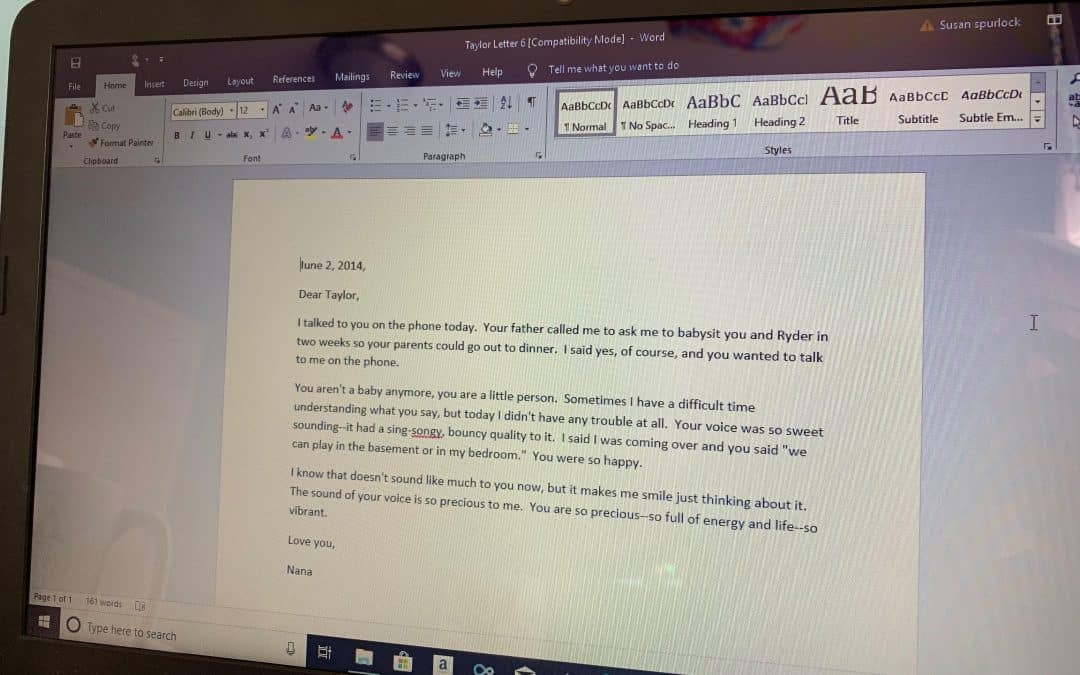 I just finished reading Betty White’s 2011 book entitled If You Ask Me: (And of Course You Won’t). In the last chapter “I’m Eighty-Nine?” she writes about aging, death and dying. One sentence on the page imaginatively captured my attention.

Curiously and with apprehension I began to wonder “what kind of letter am I writing?”

But before I thought about the answer, I pondered the many different letter formats—for which the internet has a host of answers. Among them were: Formal and Informal; Business and Professional; and Personal.

Thinking back on my life I remember many of the letters I’ve written.

My mother told me, when I was a child, she would give my gifts away if I didn’t write Thank You notes. To this day I continue to write Thank You Letters, although not because I have to but because I want to sincerely express my appreciation and gratitude. When I retired, I wrote a Letter of Resignation—with my own words, not a format letter. Unfortunately, I have written my fair share of Apology Letters–my emotions overwhelm me and I speak or act without thinking; a friend in high school use to say “open foot, insert mouth.” I’m surprised I don’t have “athlete’s tongue.” I have written several Letters of Recommendations for beloveds seeking employment or much deserved awards.

The internet even gives advice on how to write a letter, “If you need to write some formal letter, you should follow the pattern” (Zain Agu) of which many are scripted and outlined on any of a thousand (more?) sites. Of personal letters, one website advised “the writer is free to express his or her thoughts or feelings in any manner.”

This advice took my train of thought to Saul of Tarsus also known as Paul the Apostle and his Letters of Instruction to the Churches of Corinth, Ephesus, Galatia, and Thessalonica; and his personal letters to Timothy, Titus and Philemon.

Did he follow a pattern or freely express his thoughts and emotions? I’m inclined to think both or neither depending on the interpretation of 2 Timothy 3:16, “All Scripture is God-breathed and is valuable for teaching the truth, convicting of sin, correcting of faults and training in right living.” (That in itself could be the subject of a future posting.)

And yet, here I am still wondering what kind of letter my life is writing.

My pastor, in a recent sermon, said we are all a work in progress. I’ve heard this before and find it very comforting and encouraging especially in light of the drafts and sloppy copies my life has written.

I hope–in spite of incorrect spelling and punctuation, poor grammar, run-on sentences and sentence fragments—in the end when the envelope is sealed and ready to mail, mine is a Love Letter–a Grace-filled Love letter, to and from and for His glory.

Until then, my letter is a work in progress.