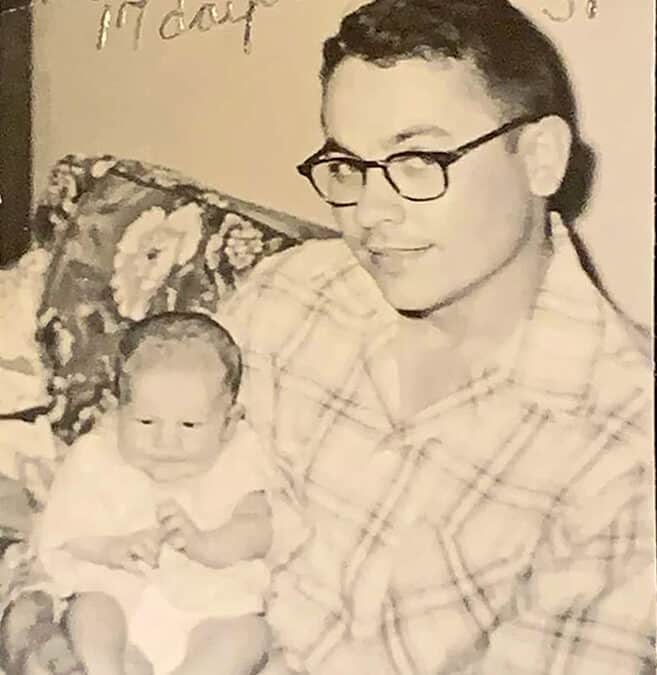 What follows is an ode to my dad.

My father has fulfilled many roles in his lifetime.

Third son born to William Henry and Hazel Taylor Fridinger on July 17, 1928, he was sibling to brothers Jack and Bill and later his closest sibling, a younger sister, Jeanne. Upon graduating from high school, he joined the Navy at the age of 17 and eventually became a Fireman 1st class. Taking advantage of the Servicemen’s Readjustment Act of 1944, he graduated from the University of Maryland with a Bachelor’s Degree in Mechanical Engineering.

As a mechanical engineer for the Naval Ordinance Laboratory, later known as the Naval Surface Weapons Center, in White Oak, Maryland, he received many awards including the US Navy Meritorious Civilian Service Award in 1963.

In 1954, in what he calls his “best move,” he married his “West Virginia girl,” and became husband to Josephine Virginia Miller. Five years later, he became a father to his only child, a daughter.

He became a grandfather in 1984—Granddad or Gdad as he is known to Christopher, Matthew and Michael and in 2001 a great grandfather—also known as GGDad to Taylor, Ryder, Brooks, Annalise, and Hazel.

He retired at the age of 55, but this did not stop him from accepting other roles.

He and Josephine joined the National Association of Retired Federal Employees in 1984 and became Life Members in 1987. He held nearly all offices in the local chapter and held every office in the State Federation of Chapters except Treasurer. He was president for three years. He started a new chapter in Charles Town when he was 1st VP and Membership Chair and four more Chapters (Pt Pleasant, Berkeley Springs, Keyser, and Elkins) when he was president. He served on the Berkeley County Council of Aging (now known as Berkeley Senior Services) for many years and was President for three and half years while the New Center was being designed, contracted and built. He was a sub chair for the senior sector fundraising. He received the “Bob Jackson Advocate for Seniors Award” in 2000 from Berkley Senior Services.

He was also an active member and office holder in the Charles Town, West Virginia chapter of AARP.

He is a self-espoused Socialist Democrat, Ford owner and United Methodist–for most of his adult life.

As the result of an upsetting incident between his parents that he witnessed as a child, he is extremely uncomfortable with confrontations. Having been raised in a patriarchal authoritarian household further contributed to his quiet, reserved nature.

Yet, it was Great Depression that was one of his saving graces—in his own words:

The depression was hard on the family. Dad was laid off from H.L. Mills and had no regular work until 1936. During those years we moved to Frederick – and back to Hagerstown – and lived mostly on money borrowed on the home that was acquired during better times. That money soon ran out; the home was lost; and we moved into an old log house in the country and along the Conococheague Creek. The house had belonged to my father’s cousin and had been empty a loooong time. The move to a house without electricity, running water and indoor plumbing was traumatic to my mother, but we boys thought it was the best and longest camping trip ever. Dad got work in a local lumber yard and gradually fixed up the house, built some boats and developed a “swimming hole” that was used by people all over the area. It was called Nickel Hole.

We learned to swim (it was mandatory), boat, and fish. We lived for a while with an Ice Box for food and a gas lantern for light. He organized the neighbors to lobby for electricity and it was brought to the area by the Rural Electrification Program – one of the depression projects. He then bought one of the first Fluorescent Lights for the dining area “for the kids to do their homework”. It took about ten seconds before it stopped blinking. We eventually got a phone – an eight-home party line – and our ring was four shorts. Good luck at making a private call! Summer baths in the creek and winter baths (occasionally) in the galvanized tub. We never got indoor plumbing or running water until we moved back to a town in 1946 after WW2.

He had first-hand experience with how instrumental government can be in improving people’s lives. FDR and the New Deal impressed upon my father the idea of service in helping others. This also explains why he has voted for every Democratic Presidential candidate since 1948. To this day he finds Ronald Regan’s quote, “Government is not the solution to our problem, government is the problem” repugnant—to say the least.

He was sixteen when he became an uncle for the first time to John Morris Fridinger, son of his eldest brother, Jack. Other nieces and nephews were born in the following years. Eleven years later he was the last of his siblings to marry, something his grandmother worried would not happen.

When he enlisted in the Navy, he fully expected to drive a landing craft onto Japanese beaches. However, the atomic bomb and later Japanese surrender changed that and he spent the next 18 months aboard the USS Sitkin, cleaning up leftover ammunition from both World Wars, and transferring ammunition at sea in preparation for the next war. In his words, “It was not a happy ship.”

When I was a child, he fixed all my broken toys. In fact, he had a workbench in the basement that I thought of as magical. I could place anything on that counter and within a day or two, it was repaired. Cars, lawn mowers, TV sets, bicycles … you name it, he can fix it; although computer technology has made some repairs more difficult in these latter years.

He is intrigued with how things work which is why he was patient answering all my questions when I was growing up. Like, “why do car tires look like they are spinning backwards, when a car is moving forward” or “why does it look like there is water in the road on a hot, summer day?” The way he responded to my many inquiries may be partially responsible for why I really enjoyed teaching Middle School science—particularly physics.

Even now, whether it is fixing football helmets to prevent head injuries or solutions to global warming and climate change, he can be heard saying to the TV news anchor, “that would be so easy to fix,” while outlining how it could be accomplished.

As an adult, I know he did not always approve of my life choices, but he was and still is extremely generous, not only financially but also graciously. He has always had my back even when I failed to realize it or take him for granted.

Unwilling to complain, he is stoic during the midst of the most difficult and trying circumstances and discerning in all of his choices throughout his life. He has said he has never met anyone that he hates and he believes in the innate goodness of ALL people.

This resume, if you will, may give you the impression of a mainstream, straight, middle class, active pillar of his community. This is true of course. However, because he lives his life through gratitude, abundance and grace, he shows a profound willingness to be inclusive of diversity more than a whole lot of people maybe even know.

This is because my father has a very simple and humble faith.

He believes in knowing Jesus and doing his best to follow His example.